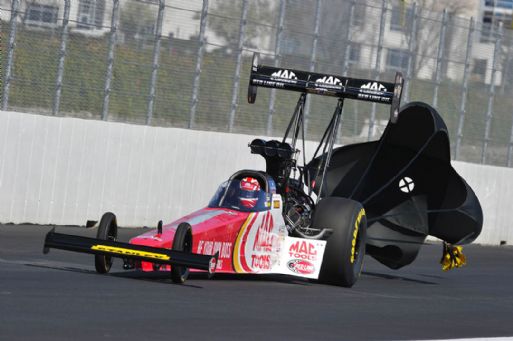 Kalitta Motorsports is one of the legendary teams in NHRA and every lap is run on Red Line, a technical and personal relationship that spans more than 10 years. Owned by famed driver and businessman Connie Kalitta and based in Ypsilanti, Michigan, this three-car operation has raised the motorsports bar for professionalism and the right attitude. Driver of the Mac Tools Top Top Fuel Dragster, Doug Kalitta is well known on and off the strip, as both the 1994 USAC National Sprint Car Champion and the president of Kalitta Charters, a successful airline. With more than career NHRA wins and the quickest 1/4 run in NHRA history (4.420 seconds), Doug and crew chief Jim Oberhofer look to make history in 2013. JR Todd, one of the sport's rising stars, hails from Indianapolis and drive the Red Line Oil dragster tuned by none other than the boss, Connie. At 33, JR is known as one of the best on the starting line and has the experience to win. In 2014, JR was 2nd in the Mello Yello Championship. Known as one of the best Funny Car drivers ever, Del Worsham pilots the DHL Funny Car for 2013 and teams with longtime colleagues Jon Oberhofer and Nick Boninfante Jr. This yellow rocket continues to be campaigned in the memory of its original driver, multi time NHRA Top Fuel champ Scott Kalitta. The Tequila Patrόn Funny Car has quickly become a fan favorite since Alexis Dejoria burst onto the scene with the Kalitta team in late 2010. Working with longtime Red Line racer Tommy Delago and assistant Glen Huzar, the beautiful young driver has her best chance ever to win her first NHRA Mello Yello National Event title. In addition to Red Line's longtime support, sponsors of Kalitta Motorsports includes Mac Tools, DHL, OPTIMA Battery, Tequila Patrόn, Optima Batteries, Technicoat Companies, and JEGS For more info about Kalitta Motorsports including exclusive content such as videos, photos and more, please visit http://www.teamkalitta.com.