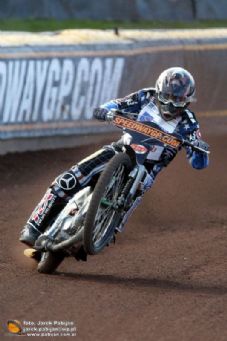 When Bruce Penhall began mentoring Speedway motorcycle racer Greg Hancock before the age of 10, many predicted that the Costa Mesa, Calif. native would go on to similar success. They were right, as "Grin" has many highlights most notably as FIM World Speedway Champion in 1997, 2011 and 2104. Greg also won the United States Speedway Championship in 2005, 2004, 2003, 2000,1998, and 1995.Hancock will once again compete in the FIM Speedway Grand Prix Series all over the world, in addition to riding in the Polish Elite Leagues for the famed Torun team. All of Greg's bikes run with Red Line 40WT Race Oil. Greg has his European base in Sweden with his wife Jennie and three sons. Aside from speedway racing Greg enjoys motocross, surfing and playing golf.