Fifteen-year old, James Bickford, is the youngest driver ever to win a Late Model Championship 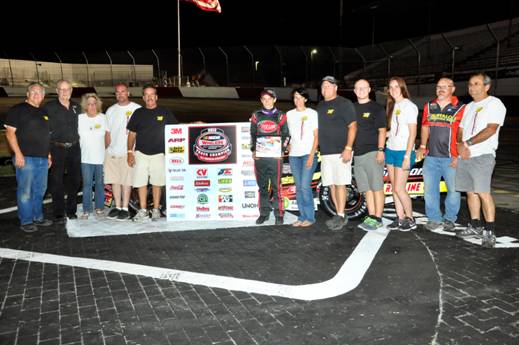 Napa, CA - Napa's James Bickford, in his rookie season racing a Late Model car, came away with the race win and the 2013 NASCAR All American Late Model Series championship on Saturday, September 14, at All American Speedway in Roseville. It came down to the last race to decide the championship, with Bickford leading by a mere two points over Ron Chunn coming into Saturday night's race. All Bickford had to do to win the championship was finish ahead of Chunn, and that is exactly what he did.

Danny Allen, from Lincoln, CA won the Late Model Trophy Dash, then next up was the 60-lap Late Model main event. With an invert of six, Bickford started from the outside of row three, and Chunn on the inside of row three. Tony Magnini started on the pole and led laps one through 34. Meanwhile Bickford moved up to third on lap eight, while Chunn raced in second. Bickford took second away from Chunn on lap 30, and then took the lead from Mangini on lap 35.

From there on it was easy sailing for Bickford, who pulled way ahead of the field. A couple of late restarts brought the field back together, but Bickford was able to lunge ahead on every restart, and then sail over the finish line first. It was Bickford's sixth win of the year.

Bickford, after doing his first ever burnout, took the checkered flag into the stands and presented his sponsor, Buff Bredehoft, of Buffship.com, with the flag. It was a special moment for both of them as they hugged each other. "This was a very emotional win for me and for my sponsors Buff and Joan," Bickford said. After every race win, Bickford takes his winning plaque into the stands and Buff and him salute each other, then he gives Buff the plaque. Bickford always shows a lot of respect for his sponsor, a war veteran, and it's easy to see how they feel about each other.

In the Winner's Circle after the race, a fan asked Bickford, "What was he going to do tomorrow, race in the Sprint Cup Series? Then the fan added, "You can be the 13th car in the Chase." It was a joke, of course, but Bickford's cousin, Jeff Gordon, is the 12th and last car in NASCAR Sprint Cup's Series Chase for the Championship. The fans in the Winner's Circle all had a good laugh over it.

"I went in knowing the race was 60 laps, so I took my time getting to the front," Bickford said in his pit after the race. "I didn't use up my stuff." He said he was a little nervous before the race because it was for the championship, but he said I looked at it as just another race and didn't let the championship that was on the line get to him.

"I feel like I am on top of the world," 15-year old Bickford said after the race. "I came into this season just looking to get some practice, and maybe to win or two, but I never imagined winning the championship."

Bickford's dad Tom said, "Rich Fields is James' spotter and he has such a calm way of talking to James and keeping him focused during races. He is a really good guy who always calmly keeps James focused on the big picture."

Bickford's next race will be at All American Speedway in Roseville on Saturday, October 12. He will race in the Late Model Fall Classic "Matt Camp Memorial Twin 52/52" race, presented by Penney Racing Supply (PRS), and A-All Mini Storage. The race will start at 6:45 pm. The INEX Legends of the Pacific will also be racing, and the main event will feature the NASCAR K&N Pro West Series "Toyota/NAPA AUTO PARTS 150" race, presented by Ace Hardware, and Incredible Solutions. The green flag will drop for the race at 8:35 pm. 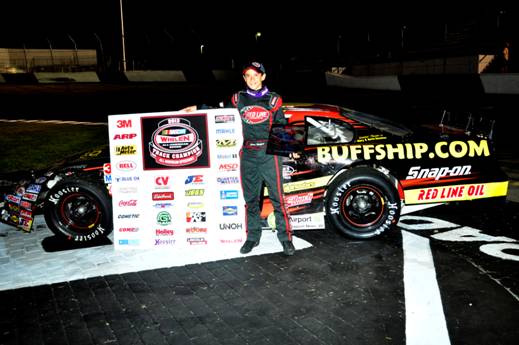 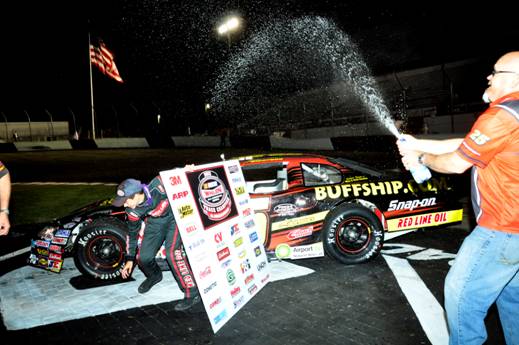